December 11, 2008
Bonn turned out to be a dead end for Nietzsche. Intellectually, the primary influence he from there was his appreciation for Friedrich Holderlin. In 1861, Fritz wrote an apologia for this, the most spurned of German Romantic poets. (Cate, page 27) Holderlin had written a poem on Empedocles. It profoundly affected Nietzsche who wrote: “Empedocle’s death is a death from godly price, scorn for men, world-satiety, and pantheism. The entire work has always shaken me most deeply each time I read it; there is a godly majesty in this Empedocles.” (Cate, page 28)

Fritz decided to pursue philology in Leipzig where, at age 21, after his break with the Church, Fritz discovered Arthur Schopenhauer. A letter Nietzsche wrote in 1865 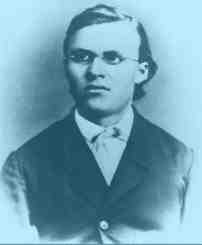 explains: “At home I nestled into a corner of my sofa with the treasure I had found and began to let that vigorous, gloomy genius work his effects on me. Here every line screamed renunciation, denial, resignation; here I saw a mirror in which the world, life, and my own deepest soul were reflected back to me in horrific grandeur. Here the vast, disinterested solar eye of art gazed upon me. Here I saw sickness and recovery, exile and sanctuary, hell and heaven. The need for self-knowing, indeed for self-gnawing, seized me violently….Thus for two whole weeks I forced myself to stay up till 2 A.M. and to quit my bed at 6 A.M. on the dot. A nervous excitability overpowered me.” (The Good European, page 40)

Fritz found a deep affinity with much of this towering philosopher, particularly in the metaphysics of nature, the irrational basis for reality, in what was termed "will", in aesthetics as a real force in the world, and particularly in Schopenhauer's elevation of music: "Because music does not, like all the other arts, exhibit the Ideas or grades of the will's objectification, but directly the will itself, we can also explain that it acts directly on the will, i.e., the feelings, passions, and emotions of the hearer, so that it quickly raises these or even alters them. Far from being a mere aid to poetry, music is certainly an independent art; in fact, it is the most powerful of all the arts, and therefore attains its ends entirely from its own rescources." (Schopenahauer, II, page 448)

Fritz was amazed to find so many ideas so close to his own contained in Schopenhauer's work, which inspired and expanding his own thinking as no one before. He became obsessed with Schopenhauer and several of his closest friends “converted” to Schopenhauer’s sweeping, insightful, but pessimistic world view. Rudiger Safranski states that in Schopenhauer, Nietzsche saw a “heroic” personality.

“Nietzsche considered three such images in recalling mankind’s loftier visions for man, namely those of Rousseau, Goethe, and Schopenhauer. Rousseau focused on reconciliation with nature and restoration of civilization to a state of nature. Geothe’s man was contemplative and made his peace with the circumstances of his life in wise resignation and a sophisticated sense of style. The Schoperhauerian man discovered that all human structures are designed to keep the tragic and senseless design of life from being palpable. Everyday life is pure diversion. Although it can plunge him into deep despair, the Schopenhauerian man aspires to lift the veil of maya (illusion) and take the ‘voluntary’ ‘suffering of truthfulness upon himself,’ which serves ‘to destroy his individual will and to prepare for the complete upheaval and reversal of his being, the achievement of which is the true meaning of life.’ Nietzsche called this approach to life ‘heroic.’” (page 51)

In October 1967 Fritz won first prize in an essay contest with a submission on Diogenes Laertius. Nietzsche was praised in an oration given in Latin by his professor before a packed auditorium. (Cate, page 79) It was the first of several Greek-related essays, many of which were published in academic journals. He was a rising star with his philological talents in Latin and Greek.

It is not an exaggeration to say that Nietzsche was masterful with academic tasks. Even if he’d rather be attending to music or reading Schopenhauer, he spent endless hours researching the ancient texts. His undergraduate work was unsurpassed in the eyes of many important professors. It was this very reputation that got him a professorship at the University of Basel without ever having taken his exit exams or written a doctoral thesis.

An extraordinary accomplishment at the age of 24 reflective of the expectations his fellow philologists had of him. He was considered an academic “prodigy”. At Basel, he generally kept an active schedule, giving both classroom and public lectures. Generally, these were well attended. “Nietzsche’s students and pupils were clearly impressed by their teacher’s proficiency and enthusiasm. Their reports are in accord: he was the one teacher whose expectations they did not want to disappoint, and so they worked harder for him than for anyone else. As for Nietzsche himself, he prided himself on his ability to reach even the least talented and least motivated of his charges.” (The Good European, page 66)

Early on he was lecturing in untraditional ways, however, reflective of the fact that, deep down, he was not satisfied with the limits of philology despite his expertise at it. Inevitably, he incorporated much about art and philosophy into his talks. An early lecture delivered in 1870 entitled “Ancient Music-Drama” was critical of Socrates and Aristophanes, something that upset a professor of philosophy at Basel. (Cate, page 106)

"As a teacher Nietzsche was both exciting and demanding. He treated his sixth form pupils as if they were already university students, demanding a great deal of independent research. The best of them he passed on to his alma mater in Leipzig. He also formed a social bond with them, putting on five-course dinners at the ends of semesters." (Young, page 102)

In 1871, after returning from service in the Franco-Prussian War, Nietzsche gave a series of lectures on early Greek culture with emphasis on the Dionysian and the musical aspects of the culture. His tireless work in this area resulted in a significant body of background research out of which The Birth of Tragedy was written.

Wagner wrote of The Birth of Tragedy: “A lovelier book than this one of yours I have never read! Everything is magnificent!” (Cate, page 139) But, as previously mentioned, the work was very controversial in the field of philology itself and it damaged his career.

The stigma of the book’s “unprofessional” presentation and its presumption of decline in German culture directly affected the attendance of the Professor’s classes at Basel. While his colleagues had up to 50 students sign-up for their philology classes, Nietzsche was suddenly rejected. Only two students signed up for his 1872-73 winter semester lecture on Greek and Roman rhetoric. “…his professional status was now practically reduced to that of an upper high-school teacher. Such was the measure of his fall from academic grace.” (Cate, page 165)

This in no way altered the direction of either his thinking or his behavior, however. In fact, Fritz made the most of the situation. "At the beginning of 1873, only two students enrolled for Nietzsche's course on Greek and Roman rhetoric. He decided, therefore, that the class should meet in his apartment....Sometimes beer was provided. He also often entertained his grammer school students there. One of these, Louise Kelterborn, has left a description of Nietzsche at home: 'One is immediately impressed by the combination of exceptional courtesy and refinement in manner and behaviour with the most charming and natural kindliness, so that one soon feels elevated directly and automatically to a finer and nobler, cleaner and higher, spiritual atmosphere...In complete harmony with the tastefulness of his demeanour and clothing, and with his almost military precision, are all the furnishings of the apartment in the pleasant, middle-class house. In light-coloured breeches and a brown frock-coat or jacket, and, out of doors, wearing a top-hat (quaintly old-fashioned, even then) - this is how he lives in my memory. On hot summer days (Basel can become extremely humid) he tried to lower the temperature in his room with blocks of ice.'" (Young, pp.164-165)

Popular posts from this blog

February 29, 2012
Note: As the heading of this post implies, this is the inspiration for the title of this blog. I had the tightrope walker of Zarathustra in mind when this attempt at philosophic biography began in 2008. For me, this singular metaphor represents, as much as any other possiblity, the essence of Nietzsche’s life and philosophy. Thus Spoke Zarathustra is different from most of Nietzsche’s previous philosophic works. For one thing it is presented in chapters, not in aphorisms. For another, like his series of lectures entitled On the Future of Our Educational Institutions back in 1872, it is a kind of parable, a story with fictitious characters used to metaphorically express his philosophy. It is not a detailed style of philosophic inquiry, as much of his earlier work. Nevertheless, various rational concepts are advocated, and contemporary European culture is critiqued and found irrelevant due to the “god is dead!” proclamation. It is noteworthy that Zarathustra himself is first mentione
1 comment
Read more

On Beyond Good and Evil: Part One

October 31, 2014
Note: All quotes are from my slightly more modern translation of Beyond Good and Evil dated 1998. Section One of Beyond Good and Evil is entitled "On the Prejudices of Philosophers." Essentially, Nietzsche argues that the traditional approach to philosophy is all wrong.  Past philosophers have taken for granted an "instinct for knowledge" (Kaufmann translates this as "drive for knowledge") that is too restrictive when considering the vast forces in play that philosophy attempts to define and contemplate.  "Thus," he writes, "I do not believe that an 'instinct for knowledge' is the father of philosophy, but rather that here as elsewhere a different instinct has merely made use of knowledge (and kNOwledge) as its tool." (Aphorism 6, the strange spelling by the translator reflects Nietzsche's often joking play on words which, in this case, means "misunderstanding".) Nietzsche critiques traditional metaphysical appro
Post a Comment
Read more

August 31, 2011
Lou Salomé, Paul Rée, and Friedrich Nietzsche posed for this racy (by the standards of the day) photo in May 1882. “After a trip to Basel to visit to his friends the Overbecks, Nietzsche returned and met with Lou on May 13 at Lucerne . At the Lowengarten , they spoke (at) a stone relief of a sleeping lion. According to Lou’s memoirs he proposed to her a second time. Again she tactfully declined but continued to beseech him to be part of the intellectual commune, what she called the “trinity.” She believed working together they could inspire one another to the greatest heights; to succumb to something as ephemeral as emotion would cause it to dissolve away. And Nietzsche was game for anything involving danger and play – the world’s most dangerous plaything: live dangerously! Build your cities under Vesuvius ! Send you ships into uncharted seas! ” ( Vickers , page 42) While Fritz visited the Overbecks, Lou got several stern talks from her mother and Paul regarding her “loose” behav
Post a Comment
Read more

Keith
No sense in going on about all that. You'll just have to see for yourself.